Skip to Content
Home Blog Miscellaneous Why I Love Tihar the most ?
by 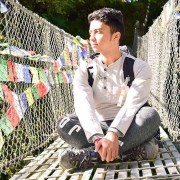 Tihar has many rituals involved like Kag Puja, Kukura Puja and other main celebrations that gives spritual vibes to the whole Nepal

Cracking these firecracker gives a moment of fun and craziness.

Tihar – The Festival of Lights

Tihar is one of the major Hindu festivals that is celebrated for five days in October. But This year, Tihar has been little late and we are celebrating it in Mid- November. Tihar, a celebration of lights and color dedicated to Goddess Laxmi, too reveals social joy all over the country. The five days are called Yama-Panchaka because the whole period is dedicated to the worship of Yama (Yamaraj) the God of Death.

Tihar festival begins with worship of crow and completes with Bhai Tika (worshipping brothers). The first day of this festival also called Kaag Tihar is the day of the crow. Crow is believed to be the massagers of Yama. The second day of tihar called “Kukur Tihar) day of the dog. Dog is worshipped according to the religious ritual. Tika is mark of blessing on dogs’ foreheads on the creature along with garlands and feed them different varieties of the foods. The holy cow is worshipped on the morning of the third day. The fourth day of Gobardhan Puja performed to honor Krishna’s of lifting the mountain Gobardhan to protect his peoples from a terrible rain and floods.

Bhai Tika is the final day of  this festival. Bhai Tika is the day people look forward to. In some communities, sisters and brothers accept tika from each other. Bhai means brother in Nepali. Brothers and sisters honor each other and the sisters pray to Yama, the God of Death, for their brothers’ progress, prosperity and longevity. The brothers bring gifts to their sisters and the festival ends with feasting.

The reasons behind Tihar being my favourite Festival are :